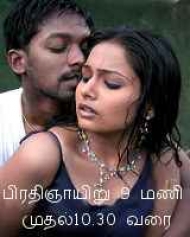 Drama
Release Date : Nov 2006
Cast : Karunas, Poornitha
Director : M. Anbu
Synopsis
Prathi Gnayiru 9.30 to 10.00 movie is about four college students Ramesh (Ramesh), Remo (Karunaas), Murugan (Balaji) and Seetharaman (Ravi) who are carefree and have no responsibilities in their life. Mistaking Kalyani (Poornitha) to be a call girl, they forcibly gang rape her on a holiday. Coming to know of their mistake, they hurriedly return to Chennai.

Ramesh is married off to a distant relative by his father (Delhi Ganesh). Only after the wedding, he comes to know that his wife resembles Kalyani. This sends a chill down the spines of Ramesh's friends.

A sequence of events lead to Kalyani taking revenge on the friends. Whether they realized their mistake and were they taken to task forms the rest of the storyline.