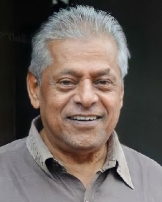 Delhi Ganesh is a veteran Tamil film actor, who mostly acts in supporting roles and is perhaps best known for his role in Kamal Hassan comedies and films like Nayagan and Michael Madana Kamarajan. He has acted in more than 120 films from 1980 to present. He was a member of the 'Delhi' drama troupe in Nanganalloor, Madras, along with another popular actor Delhi Kumar (who has acted as Madhavan's father in the tamil film Dum Dum Dum). Ganesh worked in the AGS office in Madras from 1976 to 1982 - before quitting in favour of films.

His most popular roles have been as a supporting actor or a comedian but he has done negative roles in films like Aboorva Sagodarargal (As Francis).

His first film was Raja Thirai in 1979. His most notable films are Sindhu Bhairavi, Nayagan, Michael Madana Kamarajan, Ahaa and Thenali.

He is also a prominent Tamil tele-serial actor who has acted in more than 8 major serials and has acted in fatherly roles in serials like Vasantham and Kasthuri in Sun TV.