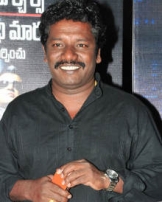 Karunas is a comedian in the Kollywood industry. He has acted with many prominent actors and starred in successful films. In 2003, he won Filmfare Best Comedian Award for his role in Thiruda Thirudi.

Karunas began his career as a pop singer and dancer. He became a popular singer of 'Gaana' or Tamil Folk Music. He then gradually appeared in films as a comedian. He is married and has two children.

Karunas is a modern-day comedian and has done good comic roles. His main comedy style, like popular comedian Vivek, is satire which he usually diverts in the direction of college romances or stuck-up snobbish beauties.

His funniest tracks include April Maathathil and Pudukotayil Saravanan, where he plays a spoof of the famous hit film 'Vaali'.