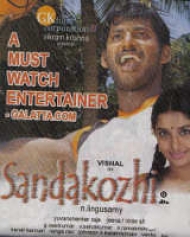 Sandakozhi is a tamil action film written and directed by N. Linguswamy.The story is about Balu (Vishal), who on a visit to his friend’s town, takes on the local dada Kasi (Lal). Balu, an engineering student, also falls in love with his friend’s sister Hema (Meera Jasmine).Kasi, after being at the receiving end of Balu’s macho ways, is smarting under the rebuff. He thirsts for revenge.

So when Balu goes back to his own city, Kasi also goes there to extract blood for blood.But Balu is from no ordinary family. His father Dorai (Raj Kiran) is himself a powerful leader in his domain. So taking out Balu is not such an easy task. But Kasi wants revenge at any cost. So what happens? It is all action and racy entertainment after that.