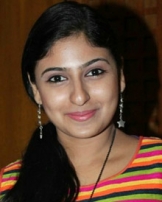 Monica or Monika (born Rekha Maruthiraj) is an Indian film actress, who stars predominantly in Tamil language films. A child actor in the early 1990s, she mostly appeared in supporting roles, before taking lead roles from the late 2000s on.

She is probably best known for performances in the films Azhagi, Imsai Arasan 23m Pulikesi and Silandhi. In 2012, she changed her name to Parvana for Malayalam films.

Monica converted to Islam, also named as G Rahima, and she officially announced it in the press on May 30th, 2014.