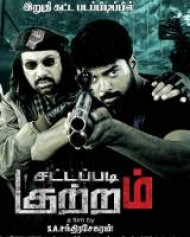 Drama
Release Date : 25 Mar 2011
Cast : Sathyaraj, Seeman
Director : S A Chandrasekhar
Synopsis
Sattappadi Kuttram is a revolutionary theme based subject which comes with a message to the society in which Seeman is playing the role of an advocate who fights hard to ensure that wrongdoers gets punishment as per the law. Ilayathalapathy Vijay will be playing a cameo role in this flick.

Sathyaraj will play an intense role in this Sattapadi Kutram, which is being directed by S.A. Chandrasekar. The movie, which has music by Vijay Antony, also stars Vikranth, Harish Kalyan, Vasanth, Bhanu, Ishwarya, Jayashree and newcomer Komal Sharma.