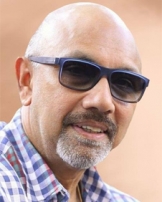 Sathyaraj is an actor in the Tamil, telugu and Malayalam film industry. Sathyaraj completed his primary school education in Tamil at St Mary's Convent, Coimbatore. He completed the equivalent of the tenth standard in a suburban high school, Ramnagar, Coimbatore. He joined the Government Arts College, Coimbatore, and completed a Bachelor of Science degree in Botany. Tamil actor/director Manivannan was a co-student in PUC (Class 12 Junior college), and the two began a friendship while there.

Sathyaraj went to see the shooting of the film Annakkili, where he met actor Sivakumar and producer Thiruppur Manian. He joined the drama troupe of Komal Swamynathan.

Sathyaraj's first film was Kodugal Illaatha Kolangal. Then, he worked as a production manager for the film Kannan Oru Kaikkuzhanthai. In addition to his managerial role, he also had a small acting part in the film. On the title credits of this film, his name was shown on screen with the description: "Aluvalaga Nirvaagam : S.N. Rangaraj, B.Sc." and later still in the credits as "Sathyaraj" for his minor acting role.

Director Santhana Bharathi says that he "was the person who introduced Sathyaraj as a hero in Kadamai Kanniyam Kattuppadu. It was a film produced by the veteran actor Kamal Hassan. Kamal Haasan had faith in Sathyaraj which made him to introduce him as a hero for his home production."