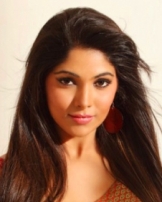 Elsa George aka Muktha Banu is an South Indian actress from Kerala. She started her career as a TV serial artist and then switched on to film industry. Her first film was Achanurangatha Veedu released in 2005. She later acted in a Telugu film titled Photo opposite Anand and Anjali.

She made her successful entry into Tamil film industry through the film Thamirabarani opposite Vishal. She later starred in some hit Malayalam films like Nasrani, Goal etc. Though most of her films are successful, she couldn't make it big in any of the language films. She has acted in Malayalam, Tamil and Telugu films.
She is also a classical dancer and an entrepreneur.