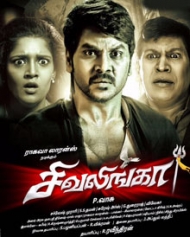 Sivalinga aka Shivalinga is a Tamil horror comedy movie directed by P. Vasu and produced by Ravindran. The movie has Raghava Lawrence and Ritika Singh in the leading roles.
Following the success of P. Vasu's Kannada horror film, Shivalinga (2016), the filmmaker chose to remake the project in Tamil.
Story
Shivalinga is a story weaved around a murder mystery. The film has two romantic stories, while one is of a murdered Muslim cook, whose Hindu fiancee seeks justice, the other other is of the protagonist and his newly wed wife, an arranged marriage.
Shiva (Lawrence) is very strict CBI officer who is married to a Ritika Singh, where she has links between these story and how Shiva helps to solve this problem is interesting plot.
Directot P Vasu initially tried to market the project as Chandramukhi 2, as a spiritual sequel to Chandramukhi (2005), and approached Rajinikanth to portray the lead role. However the actor did not accept to work on the project. In March 2016, Raghava Lawrence accepted to work on the film, while Vadivelu was also signed on to appear in a role thereafter.