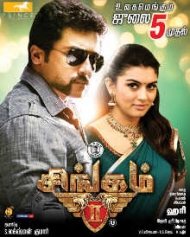 Singam 2 is an Tamil action - masala movie directed by Hari, starring Suriya, Anushka Shetty and Hansika Motwani in the lead roles, while Vivek and Santhanam play supporting roles. This movie is the sequel to Singam and will be produced by S Lakshman Kumar .
Singam 2 is a romantic action movie with double dose of each commercial element to appeal to all Class of the audiences. Surya's electrifying performance is the main highlight in it. Hari's interesting story, racy narration and hard-hitting dialogues, Devi Sri Prasad's music and background score, Priyan's beautiful picturisation, Vivek-Santhnam's rib tickling comedy, wonderfully choreographed action, stunt and dance sequences, beautiful locales and art work are other big attractions of the film. Lengthy screenplay, routine stuff and poor characterisation of villain are some of its big drawbacks.
In the climax of Singam, Duraisingam decides to resign for his post of police office and go back to his village after ending big-time extortionist Mayil Vaaganam's mafia dealings. But seeing his courage and smartness, the Home Minister assigns him a new duty of unearthing the weapon smuggling. The story of Singam 2 begins here. Set in Thoothukudi, this sequel features Duraisingam going undercover to find out the international don behind these alleged activities.
Following the home Minister's order, Duraisingam (Surya) starts working as an NCC teacher at a school in Thoothukudi. After uncovering a dangerous criminal network, he sets up 'Operation D' to nab international drug dealer. How he traps him will form the crux of the story, which is a treat to watch on screen.