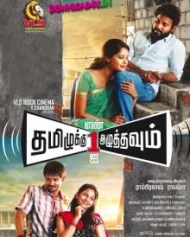 Tamiluku En Ondrai Aluthavum is an upcoming Tamil film written directed by Ram Prakash Rayappa and produced by Sasi Nambeesan. The film stars Nakul, Attakathi Dinesh, Bindu Madhavi and Sathish.
Story
The movie is about three stories which are intertwined. There is Simi (Bindu Madhavi) who gets stuck in a dangerous situation but cannot call her boyfriend Mukhil (Attakathi Dinesh). There is this taxi driver (Sathish) whose taxi is used by terrorists to destroy the city by planting a bomb and they plan to use a cell-phone as a trigger to stimulate the bomb. And then there is this brainy tech savvy college drop out, Vasanth played by Nakul who is jobless but makes a living by helping engineering students in their projects.
Simi is helplessly stranded with a lifeless phone, the terrorists are trying to explode the bomb by making that all important phone call and Vasanth tries hard with collage students to restore the signal to all mobile phones in the city, but if connectivity returns, the terrorists can trigger the deadly bomb, which has been placed in Sathish's car.
How these three stories are brought together in the end. Will Vasanth succeed, will the bomb explode and will Simi be saved from a major disaster forms the crux of this comedy thriller.