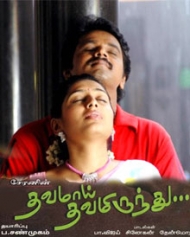 Thavamai Thavamirundhu is a Tamil emotional drama movie directed by Cheran. The film won the National Film Award for Best Film on Family Welfare. It is the Longest running Indian movie by Run time without Sequels.
The movie explores the father-son relationship, and particularly charts the travails an Indian father goes through in raising his sons.