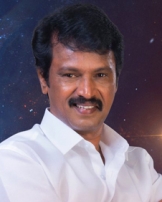 Cheran is a Tamil film director and actor who has a reputation for directing and producing culturally strong films. His movies are characterised by their realism and the strong social messages that they convey. He has won the National Award thrice, one for Vetri Kodi Kattu (which won Best Film of 2000 dealing with social issues) and one for Most Entertaining Film in 2004 (for Autograph) and one for "Thavamai Thavamirundhu" (2005) that grabbed the national award for best film on Family Welfare.

Born on 12 December, 1970, at Pazhaiyurpatty, near Melur in Madurai district, Tamil Nadu, his father was a cinema (machine) operator and his mother was a nursery school teacher. Cheran nurtured his acting skills by the stage dramas enacted in those days during local festival seasons. He went on grooming himself and his dreams by undergoing self-designed rehearsals by himself standing in front of the mirror, speaking out the film dialogues of Sivaji Ganesan, which he carried out with the accompanying acting gestures.

He was worn out after he ran away from home to Chennai with dreams of becoming an actor. As his endless chasing after people and cinema studios for getting cinema chances proved to be failures, his hopes were shattered. At last, putting an end to his day-dreaming of becoming a film actor, he succeeded in turning his attention towards the other sides of film-making. He learnt the art of film direction under the mentorship of director K.S Ravikumar.

Cheran began his career as an assistant to K.S. Ravikumar. The young man caught the attention of the film producer, Henry. Henry was the producer of the Malayalam film 'Yavanika' directed by K.G. George. Consequent to the success of that movie, he made his entry into Tamil cinema with 'Kolangal', a subject based on a girl rescued from the red light area in Mumbai who faces social problems back home in Chennai. Henry insisted that the film should not only be commercial but also have a strong social theme.

He made his directorial debut in Bharathi Kannamma through Producer Henry. The film met many controversies. In spite of it, the film was a big box office hit and gave a break to the sinking career of actor Parthiban. He became an overnight star director. He gave a hat-trick of successful films like Porkkaalam, Pandavar Bhoomi, and Vetri Kodi Kattu.

His movies concentrate on strong social messages as the story base line. His fame rose to dizzying heights in the film Autograph produced and directed by him. The film was screened four times at the Montreal Film Festival, Canada, an honor which he shares with Kamal Haasan and Maniratnam. He was thrilled by the standing ovation he received, when the show was over. With memorable films like Thavamai Thavamirundhu, he has also proved his acting versatility. An energetic all-rounder, he received National Award thrice for his films Vetri Kodi Kattu, Autograph, and Thavamai Thavamirundhu.
Bigg Boss
He is one among the 14 contestants in the Season 3 of Bigg Boss Tamil.