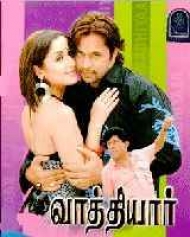 U/A | Action Romance
Release Date : 15 Nov 2006
Cast : Arjun Sarja, Mallika Kapoor
Director : A. Venkatesh
Synopsis
Vaathiyar movie is all about Dorai (Arjun) who is a do-gooder don. But the entire police force led by ACP Easwara Pandian (Prakash Raj) is after him. But the poor and the needy need him as he is a Good Samaritan running an orphanage with his Man Fridays (Manivannan and Vadivelu).

But Dorai has a problem. His mother doesn’t approve of his ways. She feels that he is just a loutish goon. There is also Anjali (Mallika Kapoor) who is a TV journo, who is in love with Dorai because of his dare devil ways.

Dorai has a past too. He was just an honest-to-goodness school teacher, who ends up as the deathly Dorai after a fire ravages a school and kills several children. The incident forces him to take on the system of venal officials and politicos.