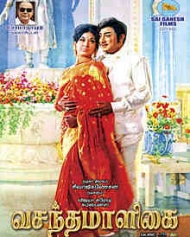 Vasantha Maligai is an tamil movie starring Sivaji Ganesh. The Movie revoles around Anand (Sivaji Ganesan) is a drinking alcoholic and he has a brother called Vijay(K.Balaji). Anand goes on an aeroplane from another country back to his home. An air hostess called Latha (Vanisri) is also aboard on the plane. After the plane lands, the film returns to Latha's house. She has a father (Sundarajan), mother (Pandhari Bai), two brothers and a sister.

Her elder brother has already married and his wife lives in the same house too. Latha is the person who is now earning as she is the eldest. They are a middle-class family and her mother wants her to find another job as being air hostess means that she would come home late and it would be hard.

Meanwhile, Anand celebrates his birthday in a pub like area near his house. Vanisri goes to the same pub for her job now and she has an interview with the manager. However, the manager is a bad person who shuts the room and tries to rape her. Anand hears Latha screaming from outside as he is going home, and pushes the door. He fights the manager and takes Latha in his car to her own house. The next day, Latha returns to Anand's house with his coat that he gave her to wear and some money. She asks him for a job. He agrees and gives her a job as a person who takes care of his needs.

The next day,he shows her around his house and she meets his mother, brother and sister-in-law. Latha soon notices that Anand is an alcoholic and wants to go away but his servant says to her that she must not as after she has come, he is behaving a bit more properly.

Anand's fiancee comes to his home but she soon complains in front of Anand that he is a proper alcoholic and that she does not wish to marry him. Meanwhile his sister-in-law thinks that Latha has come to take his fiancee's place. Anand's mother is taken aback by her comment and Anand's fiancee's comment too.

Latha tells her, after everyone has left the table; that she will try and stop Anand from drinking. Later on she catches Anand drinking with his servant(Nagesh). His servant runs away from seeing her but Anand stays there still drinking.

Latha throws the glass after arguing with him and Anand gets so furious that he throws another glass bottle onto Latha's forehead. But he soon realises that what he did was bad and shoots all his drinking bottles and makes a promise to Latha that he will never drink again. He tells her about his life and that he had an Ayya who soon died when he was young and that he his father had died too.

But after this incident Anand tells everyone that he is going to build an new palace for himself and the girl that he adores in his heart. This palace is called 'Vasantha Maligai'. He takes Latha to his house as everyone else in his family has sent her to ask him about the girl he likes. But actually, he loves Latha.

Then all of a sudden, Anand's mother comes in and says that she should marry Anand. Anand gets too sick that when Latha sees him in the palace and he faints. He also drank poison before she came. At the hospital Anand recovers and sees Latha ad his family. The film ends with Latha hugging Anand.