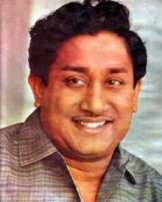 Viluppuram Chinnaiahpillai "Sivaji" Ganesan was an Indian film actor and one of the first method actors in India, active during the latter half of the 20th century. His fame came from his versatility and expressive prowess in Tamil cinema.

He was the first South Indian film actor who won a best actor award in an international film festival, the Afro-Asian Film Festival held in Cairo, Egypt during 1959. Sivaji's legacy of acting is still admired today, also being an influence to many other Indian film actors. Many contemporary actors in South India have confirmed that their acting styles were influenced by Ganesan.

Acting career
Debut as a lead artist
Apart from his immense success and reception in Tamil cinema, he has also acted in Hindi, Telugu, Malayalam, Bengali, and Kannada-language films. Ganesan's first film was the Tamil film Parasakthi in 1952, co-starring actress Pandari Bai. The script for the film was written and directed by the now-Chief Minister of Tamil Nadu, M. Karunanidhi. He took his stage name from Emperor Shivaji, one of the roles he had once enacted.[citation needed]

Donning versatile roles
In most of Ganesan's films, he played multiple roles, commercial roles, and roles of a Hindu deity specially the Lord Shiva role. The portryal of Lord shiva in the movie Thiruvilayaadal won him lot of accolades in and around the film industry. In the film Navarathiri (1964), Ganesan donned nine different roles that represented the nine emotional states of a person.

Hindi actor, Sanjeev Kumar, was inspired by this film and reprised the nine roles in Naya Din Nayi Raat in 1974. Ganesan could strike a balance between commercial cinema,Mythological cinema and experimental cinema. Sivaji was always unique when compared to other actors in India during his generation.

Expert analyst from cinema admitted the three best versatile actors from India at that time were Shivaji, Dr.Rajkumar and N. T. Rama Rao. He experimented in films like Thiruvilayaadal, Thiruvarutselvar, Thirumal Perumai, Karnan, Veerapandiya Kattabomman, Thillana Mohanaambal and Raja Rishi. His role in the film Veerapaandiya Kattabomman made him the first South Indian actor recognized outside India in the Afro-Asian film Festival at Egypt. He was also applauded for his acting in the film Aalyamani which was remade later by N. T. Rama Rao.

Nearing retirement
Apart from his numerous roles as a single star on screen, Ganesan has acted in supporting roles with many leading actors from different eras. Ganesan has co-starred with M. G. Ramachandran, M. N. Nambiar, Gemini Ganesan, Kamal Haasan, Rajinikanth, Prabhu Ganesan, Sathyaraj, Vijayakanth, Mohanlal, Ramarajan, Y. G. Mahendran, Sivakumar, K. Bhagyaraj, Karthik Muthuraman, Arjun Sarja, Joseph Vijay and Abbas. He has also worked with a vast amount of directors and producers. His legacy continues to be remembered today and is looked upon by many leading film actors.

Death
Suffering from respiratory problems, Ganesan was admitted to the Apollo Hospital in Chennai on July 21, 2001. He also had been suffering from a prolonged heart ailment for about 10 years. He died at 7:45pm (IST) on July 21, 2001 at the age of 73. A documentary, Parasakthi Muthal Padayappa Varai was made to commemorate Sivaji Ganesan's legacy. His funeral was attended by thousands of viewers, polititians and personalities from the South Indian film fraternity.

Statue
A statue was erected in Chennai, Tamil Nadu to honour the actor in 2006. It was unveiled by the Chief Minister M. Karunanidhi.

Legion of Honour
Sivaji Ganesan's most prestigious award was the 'Chevalier' in 1995, awarded by the National Order of the Legion of Honour in France. This is one of the main decorations of the French Republic which is conferred to honour the most original and talented personalities, for their remarkable contributions in the field of Arts and Literature in France and all over the world.

On April 22, 1995, at a ceremony held at the MAC Stadium, Chennai, Sivaji Ganesan was presented the Chevalier title and medallion by the French Ambassador to India, Philip Petit. J. Jayalalitha, the entire Tamil film industry and representatives of all other Indian regional film industries were present at the ceremony.