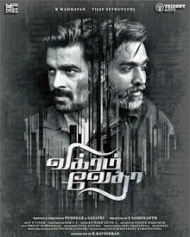 Vikram Vedha (Vikram Veda) is a Tamil movie direction by duo director  Pushkar-Gayathri. The movie has Madhavan, Vijay Sethupathi, Kathir and Vara Laxmi in the lead roles.
Story
The movie Vikram Vedha story is a cat-and-mouse game between serious cop Vikram (Madhavan) and well known gangster Vedha (Vijay Sethupathi). A team lead by Vikram, is on the hunt to capture a gangster Vedha.
On an operation Vikram’s wife Priya (Shraddha Srinath), who is also Vedha’s lawyer; Vikram’s team. Vedha’s brother Pulli (Kathir) and his girlfriend Chandra (Varalaxmi), who are used in his operation to get Vedha. What happens to Vedha? Did Vikram finishes his task? are the rest of the story to be watched on big screen.
Productions
Madhavan will be seen as cop and Vijay Sethupathi will be seen as gangster in the movie, while ‘Kirumi’ Kathir, Shradhaa Srinath of ‘U- Turn’ fame and Varalakshmi Sarath Kumar are also playing pivotal characters in the movie.
Aaranya Kaandam fame PS Vinod will be handling the camera. CS Sam will be composing music for the movie. 'Y Not Studios' Sashikanth is producing the movie.
The movie Vikram Vedha starts rolling from Nov 16, 2016 and movie is expected to hit the screens by mid 2017.