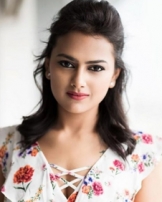 Shraddha Srinath is an Indian film actress who predominantly appears in Kannada, Malayalam, and Tamil films. Shraddha Srinath was born in the town of Udhampur, Jammu & Kashmir. Her father was an officer in the Kumaon Regiment of the Indian Army and her mother was a school teacher. She was raised all over India. After graduating from 12th from Army School RK Puram in Secunderabad, she moved to Bangalore to study Law at the Bangalore Institute of Legal Studies.

She was called to audition for the role of the female lead in a Kannada film for which she eventually got selected. That film however did not take off. Soon enough, after being spotted in a digital commercial, she was called to play the second female lead in the Malayalam film called Kohinoor, directed by Vinay Govind, which released in September 2015, thus making her silver screen debut.

Her grand Kannada debut happened in May 2016 with U Turn which was directed by Pawan Kumar which premiered at the New York Indian Film Festival and then subsequently released in India and worldwide to glowing reviews.

Shraddha has now finished working on Kannada films named Urvi directed by Pradeep Varma and Operation Alumelamma directed by Simple Suni. She will be making her Kollywood debut with a film opposite Nivin Pauly directed by Gautham Ramachandran for which she has finished filming. She has also finished filming for Mani Ratnam movie titled Kaatru Veliyidai. She is also playing the female lead in R.Kannan's movie Ivan Thanthiran which is being filmed now.