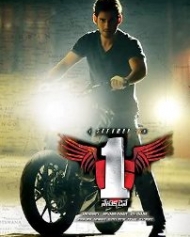 1 Nenokkadine is a romantic action entertainer in which, Mahesh babu will be seen as rockstar. Mumbai based model and Kathak dancer Kriti Sanon is playing the female lead role in this movie.

Gautham (Mahesh Babu) parents were killed by three men, when he was at young age and He grows old without knowing the reason why they killed his parents and he couldn't even recall his parent's face, but he remembers those who had killed them and wants to take revenge.

He becomes a rockstar, and starts his hunt for those killers. In the mean while journalist called Sameera (Kriti Sanon) enters Gautham’s life and fall in love with him. Will he get those men who killed his parent forms the rest of the story.

In November 2011, it was reported that Tamannaah, Akshara Gowda, Kajal Aggarwal and Angela Jonsson was under consideration for the role opposite Mahesh Babu. Finally, on 5 October 2012 it was officially announced that Kriti Sanon would replace Kajal as the female lead in the film.

In February 2013, a test shoot was done on Mahesh Babu's son Gautam and reports emerged that he would make his debut in the film, but it had no official announcement then. However it was confirmed that Gautham was a part of the film and he would play the role of the hero at a young age. Added to this, he dubbed for his role at Shabdalaya Studios in Hyderabad on 9 December 2013.

On 16 December 2013, actress Samantha commented on the film's audio release poster and it became controversy in the industry.

The audio rights were acquired by them for an amount of INR8 million, contrary to the tradition of Aditya Music acquiring Mahesh's previous films' audio rights.

The movie release scheduled in the race with Ram Charan's Yevadu