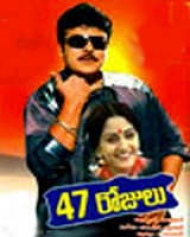 U | Family
Release Date : 13 Sep 1981
Cast : Chiranjeevi, Jayaprada
Director : K Balachander
Synopsis
47 Rojulu is family oriented movie in which, Chiranjeevi played an role of NRI, who married JayaPrada and brings her to Paris. He already has an american girl friend here, and chiru manages to convince jayaprada that she’s his colleague.
He also manages to convince his girlfriend that jayaprada is his sister and came here as a tourist. His real plan is to grab money from his paris wife and returning india.
He takes advantage of jayaprada’s innocence to the maximum extent by exploiting her on all grounds for 47 days. He writes letters as if they were written by jaya’s parents and blackmails her for sex, when she wants those letters.
Jayaprada, after knowing his true intentions tries to escape once but fails. One day Chiru and Jayaprada went to a...