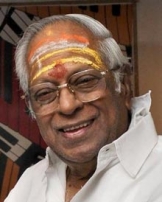 Manayangath Subramanian Viswanathan (24 June 1928 – 14 July 2015) (or M.S.V.), is a popular south Indian music director for five decades. He is popularly known as "Mellisai Mannar" (Tamil, for "The King of Light Music"). His major works are in Tamil, Malayalam and Telugu films. He has also acted and sung in a few films.

Viswanathan, hailing from an orthodox Malayali family, with parents Subramanian and Narayanikutty (or Naanikutty), in Manayangath house (from which one of his initials is derived) in Elappully village in Palakkad, Kerala, India in 1928. He lost his father when he was four. He was saved by his grandfather when his mother decided to kill him and herself as an escape from abject poverty and lack of support. He sold foodstuff in a movie theater during his childhood and later learned music from Neelakanda Bhagavathar. He gave his first stage performance in Trivandrum, when he was 13 years old.

Despite his Keralite background, he established a prolific film music composing career in the Tamil film industry. His first score was for the film Jenova. He dominated film music composing in the South Indian film industry during the 1960s and 1970s and together with Tiruchirapalli Krishnaswamy Ramamurthy he has composed scores for over 700 films.

His achievements range from introducing fresher melodies, style and orchestration approaches to incorporating various genres of what is now called world music into Indian cinema music. He has sung over 500 of his own songs, as well as those of other music directors like V. Kumar, Shankar Ganesh, Ilayaraaja, Gangai Amaran, Deva and A. R. Rahman. He has also scored music for many non-film albums and for political campaigns. His achievements include appearances in numerous films and television series.

He often worked with the well-known Tamil poet and lyricist Kannadasan. It may be a strange coincidence, both are born on the same date, MSV being one year younger. In recent times, Viswanathan has focused on composing devotional music and anchoring as judge in Malayalam TV reality shows.
Death
In July 2015, Viswanathan was admitted to hospital with breathing difficulties. He died on 14 July 2015 from a kidney cancer at Chennai, Tamil Nadu, India.