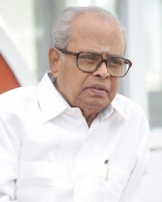 Kailasam Balachander was an Indian producer, director and screenwriter. He directed films in Tamil, Kannada, Malayalam, Telugu and Hindi. He was known for his distinct film-making style; the films he scripted and directed analysed unusual or complicated interpersonal relationships and social themes.

In his career, he has contributed to the Tamil film industry in South India, and has introduced hundreds of actors into the Tamil cinema, including Kamal Hassan, Rajinikanth, Prakashraj and Vivek.

Balachander was born to Saraswati and Dandapani Kailasam.

Known amongst actors as a tough taskmaster, K. Balachander was able to extract from these actors some of their finest acting performances for his films. Prior to his involvement in Indian cinema, he worked as a school teacher in Muthupet, Tiruvarur District, and as a playwright.

Balachandar has always been ahead of his time, be it films or a TV serial. Initially into theatre, he presented plays like "Edhir Neechal", "Navagraham" etc. It was M. G. Ramachandran who had asked him to write dialogues for the film Deiva Thai. After this, more offers to pen dialogues came his way and he was well into script writing.

But producers sensing his potential brought him into direction with Thamarai Nenjam. He later turned a producer and under his banner Kavithalaya Productions presented movies such as Muthu, Roja, Jathi Malli, etc., which have left a powerful impact on the audience. Despite his success in the film industry, his first love remained the stage.

His notable films were Tamil productions such as Apoorva Raagangal (1975), which deals with a father-son relationship that culminates in a complex dilemma; Avargal (1977), which follows the life of a divorcee, as she traverses various relationships in reverse, i.e., from divorce, to marriage, to falling in love; Varumayin Niram Sigappu (1980), a drama that charts the travails and struggles of three educated but unemployed youths in a large and harsh city; 47 Natkal (1981), which traces the adversities of a newly-wed Indian woman living with an abusive, expatriate husband in a Parisian suburb; and Sindhu Bhairavi (1985), about the intellectual collision and subsequent romance between an eminent Carnatic musician and his ardent female critic.

His most successful Hindi film was Ek Duuje Ke Liye (1981), for which he received two Filmfare nominations, one for directing and the other for best story.

His Telugu films Akali Rajyam, Maro Charithra and Rudraveena were seen as one of the best movies ever to be made in the Telugu film industry.

He directed the story about a woman breadwinner taking care of her family in several languages, he also made the Tamil film Aval Oru Thodar Kathai (1974), the Telugu film Anthuleni Katha (1976), and produced the Kannada film Benkiyalli Aralidha Hoovu (1980).

In an interview to Maa TV Channel, the doyen of Telugu film industry Dadasaheb Phalke winner Akkineni Nageswara Rao (ANR), when asked if there was any unfulfilled wish - expressed his desire and interest to act in a film directed by Shri K. Balachander! That salutes Balachander to the hilt!

To him goes the credit of discovering new talent in acting, direction, and other technical areas, many of whom have made a mark in their respective fields. Rajinikanth, a discovery of Balachandar and Kamal Hassan, whom he moulded into a great actor, prove this.

His serials Kai Alavu Manasu, Kadhal Pagadai, Premi, Jannal Anni and others have been successful. "This medium helps to reach out to the public. That's why I am into making serials," said Balachandar. He strongly felt that the three different medium of entertainment — theatre, cinema and television are bound to co-exist.

After nearly 40 years, and as a homage to his dear friend Nagesh, KB returned (and was "Reborn" as he himself claims) to theatre through the play "Pournami". Starring Renuka and Poovilangu Mohan among others, the story was about a homemaker whose husband gets caught in Pakistan under the suspicion of being a terrorist. The play, riddled with KB's signature humour, intelligent dialogues and political overtones, was well received and signaled a clean return to the theatre for KB.

Balachander was married to Rajam. The couple has 3 children, two sons (Kailasam, Prasanna) and one daughter Pushpa (known as Pushpa Kandaswamy, CEO, Kavithalaya Productions). His great grand daughter is currently residing in Bangalore.

K. Balachander received the Padma Shri award in 1987 from the Indian Government in recognition to his contribution to the arts. He has introduced almost all the major actors and actresses in Tamil and Telugu (Rajinikanth, Kamal Haasan, Sridevi and Chiranjeevi).

K. Balachander has has been conferred the Dadasaheb Phalke Award.

K. Balachander passed away at a private hospital giving up his private battle with prolonged illness on Dec 23rd, 2014.