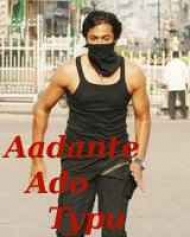 Romance
Release Date : 30 Aug 2003
Cast : Aryan Rajesh, Shivaji
Director : E V V Satyanarayana
Synopsis
Aadante Ado Typu  is an Romance based movie. In which, Surya (Aryan) is a man who hates love. But somehow he is charmed by Brinda (Anitha). Brinda likes his attitude and admires him as a friend. But her admiration coupled with a few coincidences makes Surya think that she is in love him. When he is expecting her to spell those magical words (I love you), she introduces Surya to her fiancée (Sai Kiran). After Brinda weds her beau, a damsel (Bhumika Chawla) meets Surya and explains the flashback. That beautiful girl is a silent admirer of Surya and had been following him for years. She proposes to Surya when they were in college. Surya asks her to come back once he is financially settled, as love and life after needs security. rest of the story story is how all ends well.