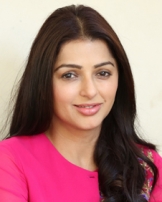 Bhumika Chawla is an Indian actress. She made her film debut in the Telugu film Yuvakudu (2000) and has since then worked in various Indian film industries and appeared in over thirty films in Telugu, Tamil, Hindi, Bhojpuri, Punjabi and Malayalam. She is probably best known for her critically acclaimed performances in Kushi, Tere Naam, Missamma, Gandhi, My Father and Sathyabhama.

Chawla was born in a Punjabi family in New Delhi, India and completed her schooling there. She moved to Mumbai in 1997 and started her career with ad films and Hindi music video albums. She also appeared in the Zee TV series Hip Hip Hurray.

Chawla started off her film career in the Telugu film industry, starring in the feature film Yuvakudu (2000) alongside actor Sumanth. Her second release, Kushi (2001), in which she starred opposite Pawan Kalyan was a box office success, following which she acted in several films in Telugu, including Okkadu (2003) opposite Mahesh Babu, which became one of the year's highest grossers in Telugu.

Meanwhile, she made her debut in the Tamil film industry as well, starring in the film Badri (2001) opposite actor Vijay, which was followed by her second Tamil film Roja Kootam (2002).

After a number of critically and commercially successful films in the South, she starred in her first Bollywood film, Tere Naam (2003), alongside Salman Khan. The film was one of the year's highest grossers. Apart from it, it was a critical success and her performance in the film won her many positive notices as well as several nominations for Best Debut at different award ceremonies. She was nominated for her first Filmfare Best Actress Award, and won the Best Debut trophy at the Zee Cine Awards ceremony.

She returned to Telugu, acting in the films Naa Autograph (2004), a remake of the Tamil film Autograph and Jai Chiranjeeva, alongside Chiranjeevi and Sameera Reddy. Whilst Chawla's performance in the former won her accolades and the CineMAA Jury Award for Best Actress, the latter went to become a super hit film.

Bhumika Chawla married her long-time boyfriend and noted Yoga expert and teacher Bharat Thakur on 21 October 2007 at Devlali, Nashik in a Gurdwara. She went regularly to Thakur's courses and is said to have dated him for four years, before eventually marrying him.