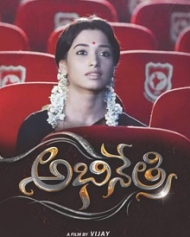 Abhinetri is an horror thriller movie directed by A L Vijay which is simultaneously being shot in Telugu, Tamil and Hindi languages. Titled as Devi in Tamil.

Tamannaah playing the title role along with Amy Jackson, Prabhu Deva and Sonu Sood are appearing in crucial supporting roles.