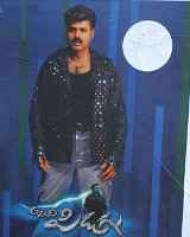 U/A | Action
Release Date : 05 Oct 2005
Cast : Balakrishna, Katrina Kaif
Director : Jayanth C Paranji
Synopsis
Allari Pidugu is a action based movie Directed by Jayanth C paranji.Charkavarthy (Puneet Issar), has two sons Giri and Ranjith (both played by Balakrishna). Giri is the younger one, who is the village Romeo and in love with his cousin Subbalakshmi (Charmy). Ranjith turns into an ACP and meets his match Swathi (Katrina Kaif). GK (Mukesh Rushi) is a member of the parliament, whose anti-social activities are contained by Ranjith. Also, Chakravarthy who spends 14 years in prison after falsely charged by GK in a case is released. GK plans to take revenge on the family. But, the person who comes to the rescue of the family and the people threatened by the villain’s plans is Giri. The story is on how he ends as winner, by saving lives and winning respect from his father.