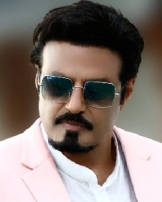 Nandamuri Balakrishna, popularly known as "Balayya," is a notable Tollywood actor. His movie career spans more than 30 years. He is the son of the former Chief Minister of Andhra Pradesh and Tollywood actor Nandamuri Taraka Rama Rao.

Nandamuri Balakrishna entered the film industry at the age of 14 through his home production, Tathammakala, in which he had the opportunity to work with the late Sri NTR and Dr. Bhanumati Ramakrishna.

For 10 successive years, he acted off and on in movies, most of which were produced under his own label. 1984 is the year when his first movie as a solo hero was released, and interestingly, he acted in a very small number of movies made under his own productions after that.

Even though he entered the film industry because of his father, later his hard work, discipline, talent, and dedication made him stand out in the industry. He believes in astrology and numerology.

He acted in a brother's role to his real-life father in that movie as well as in "Roudi Ramudu Konte Krishnudu" and in a son's role to his real-life brother Hari Krishna in the movie "Dana Veera Sura Karna." In the year 1984, he acted in 3 popular films, "Mangamma Gari Manavadu," "Kathanayakudu," and his own production, "Sri Madvirat Potuluri Virabrahmendra Swamy Charitra."

In the year 1986, the magazine "The Week" published Balakrishna's picture on the cover page. During the year 1993, only two of his movies were released, and surprisingly, both of them were released on the same day. This is a very rare event in the Telugu film industry. He ended the millennium with a popular movie, "Samara Simha Reddy."

Balayya is famous for his roles in movies with a village backdrop. He worked as an associate director for his father's last directional venture (Samrat Asoka). He is a fan and admirer of his father, and he has respect for his father's contemporaries.

NBK has acted in more than 89 movies so far. Three of the 76 movies are silver jubilee pictures. He began his career in film as a child artist. He got his first commercial break as a hero with "Mangamma Gari Manavadu." In the early days, Bhargava Arts and Kodi Rama Krishna were responsible for elevating Balayya's hero image.

Balayya did a lot of "rural" movies that were runaway hits. Another milestone in the career of NBK was "Muddula Mavaiah," from the makers of MGM. On the other hand, B. Gopal is the director who has made NBK the most successful. In the summer of 1992, Rowdy Inspector set the cash registers ringing.

After Peddannayya, nothing significant happened until 1999 for NBK other than a string of flops. His Samarsimha Reddy, which was released with a deficit, performed spectacularly at the box office. Samara Simha Reddy is the pinnacle of success for NBK.

His movies Samara Simha Reddy and Narasimha Naidu had returned box office figures for Balayya. Narasimha Naidu took everybody by surprise. He won the "Cine Goers Association's best actor award for 2001" and "the Nandi award for the year 2002" for his performance in Narasimha Naidu.

Also conferred on him was the "Narasimha" tag, and it was a sweet accolade that marked the silver jubilee of his career. He had acted in four Golden Jubilee movies produced under the Bhargav Arts (producer Sri. S. Gopala Reddy) banner.

Though he is known for his ferocious acting, he also played soft roles and got appreciation from all and sundry. Three immaculate classics of NBK's career are "Naari Naari Naduma Muraari," "Aditya 369," and "Bhairava Dweepam."