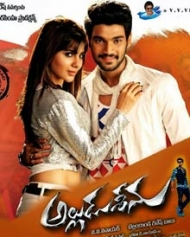 Alludu Sreenu is a romantic action entertainer movie in which, Bellamkonda Sai Sreenivas making his debut to Tollywood as hero with this movie along with Samanth in the female lead. Tamannaah Bhatia made a special appereance in Labbar Bomma song in this movie.
Story

Alludu Seenu (Bellamkonda Sreenivas) and his uncle Narsimha (Prakash Raj) are thugs and they plan to run away to Chennai, when they fail to return the money borrowed from the villagers. But they get into a wrong train in hurry and land in Hyderabad.
A situation leads Alludu Seenu to bump into his uncle's lookalike named Bhai (Prakash Raj), who is a mafia don in the city. When Alludu Seenu comes to know about Bhai's history, he seizes the opportunity and makes use of his PA Dimple (Brahmanandam) to earn some quick bucks in his name.
He also falls in love with Bhai's daughter Anjali (Samantha), but a horrifying truth separates the lovers. What is the truth? The rest of the film will answer this question, which should be watched on screen.
V. V. Vinayak directing this movie under Bellamkonda Suresh's production banner Sri Sai Ganesh Productions. Devi Sri Prasad scored music. while Chota K. Naidu handled the Cinematography.