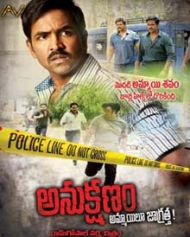 A | Crime
Release Date : 13 Sep 2014
Cast : Manchu Vishnu, Tejaswi Madivada
Director : Ram Gopal Varma
Synopsis
Anukshanam is a crime thriller film, which is inspired by a real life incident. The film is based on a serial killer who sends a wave of panic across Hyderabad.

Gautam (Vinshu Manchu) is a DCP in Hyderabad and he takes charge of the case of a psycho killer after a series of murders take place in the city. When he does not get clues about the serial killer.

He takes the help of Shailajaa (Revathi) a research specialist on psycho killers. How he nabs the killer will form the crux of the story, which should be watched on big screen and enjoyed.