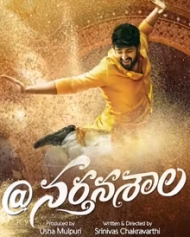 At Nartanasala movie is a romantic entertainer directed by Srinivas Chakravarthi and produced by Usha Mulpuri under IRA Creations banner while Mahati Swara Sagar scored music for this movie.

Naga Shaurya, Kashmira Pardhesi and Yamini Bhaskar are played the main lead roles in this movie.

Kalamandir Kalyan (Sivaji Raja) has a penchant to father a baby girl; but unfortunately, his wife delivers a baby boy (Naga Shourya). Throughout the childhood, Kalyan raises his son like a daughter, which hampers his actions and behaviour. Cut the scene into adulthood and Naga Shourya is seen running a self-defense training school for women.

The protagonist falls in love with Manasa (Kashmira); but somehow gets entangled in a single-street love triangle...