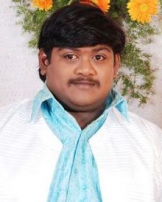 Suman Shetty is a popular developing comedian/actor in Tollywood, the Telugu Film Industry and Kollywood, the Tamil film industry in South India. He shares a striking resemblance to Senthil.

Shetty is a native of Vishakhapatnam, popularly known as Vizag, from Andhra Pradesh, India. He has constructed a beautiful house and settled there. He is famous for his dialogue modulation and expressions, which brought him into limelight.

Renowned cine story writer Satyanand first identified his acting skills and encouraged him to act in films. Producer and director Teja gave him his first opportunity in his movie Jayam, which became one of Tollywood's biggest hits. Teja made this movie with an entirely new cast, with which other actors such as Nitin, Sada, etc., also came into limelight.

After Jayam, Suman Shetty got many opportunities in South Indian Films and he did a variety of roles. Today, he is one of the most notable comedians in Tollywood and Kollywood.