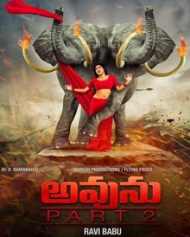 The story takes off with the concupiscent ghost, which follows Mohini (Poorna) and her husband (Harsha vardhan Rane) even to their new home. Director Ravi Babu tried to induce few more characters and add some substance by dealing with too many concepts like Schizophrenia.

The Philip Experiment and Thermal Photography. Is it Captain Raju (Ghost) that is causing the disturbances in the house or something else? you got to watch it on screen.

Avunu 2 movie written and directed by Ravi Babu and produed by Suresh Babu. While Sekhar...