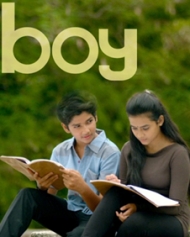 Boy is a romantic entertainer movie directed by Amar Viswaraj and produced by R.Ravi Shekar Raju and Amar Viswaraj. The movie cast includes Lakshya Sinha and Sahiti are in the lead roles. Elwin James and Jaya Prakash.J scored music.

It’s a story about a Boy during the final days of his high school. 15 year old Mahi Teja (Lakshya Sinha) is studying his 10th. His simple world revolves around his home, school, his best friend ‘Vayu Nandan’ and his first crush Varna (Sahiti) who is also in 10th but in different school.

Mahi realizes that Varna has taken pre-admission in National College. So his mission is now to join the same college. But he is devastated to know that the college is considered a Gateway to the IITs and to get an...