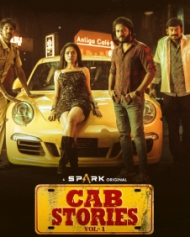 Cab Stories is a suspense thriller movie directed by K V N Rajesh. The movie casts Divi Vadthya, Shihan, Dhanraj, Giridhar, Praveen, Siri and Nandini are in the lead roles. The Music composed by Sai Kartheek while cinematography done by Sujatha Siddharth and it is edited by Tammiraju. The film is produced by S Krishna under Imagespark Entertainment banner.

Giridhar works as a cab driver. A person who was boarding in Giri Cab slips one packet from the drugs bag. Giri, who is very honest by nature finds the drug pakcet and thinks that from this drugs packet he can make a lot of money and plans to hit it off.

The plan to smash that drug packet disrupts Giri's life. Shalini (Divi), who boarded the cab as soon as the man who lost the packet landed, takes a crucial...