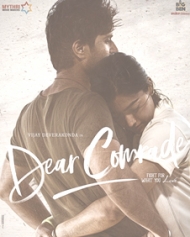 The core plot of Dear Comrade surrounds a youngster fondly called as Bobby, who heads the Students Union of a college in Kakinada. He meets a girl named Aparna Devi aka Lilly, who is a close relative of his neighbhour. They fall in love and the movie takes us through their relationship, dream and the fight for what they love.