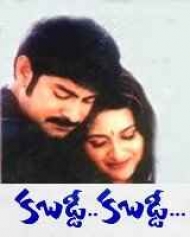 Comedy Romance
Release Date : 16 Feb 2003
Cast : Jagapati Babu, Kalyani
Director : Venky
Synopsis
Kabaddi Kabaddi is an Comedy Romance based movie. In which, Rambabu (Jagapati Babu) is a aged unmarried youth, who spends most of his time with a gang of friends from different age groups. Kaveri (Kalyani) is the sister of village head in Sakhinetipally, a neighboring village of Venkannapalem, where Rambabu lives.


Rambabu loves Kaveri at the first sight. And both of them are in love. Brother of Kaveri objects to their love as Rambabu is a wayward youth. Rambabu challenges to defeat the Kabaddi team of Sakhinetipally and asks marriage with Kaveri as the prize. Kaveri's brother agrees to it.


The rest of the story is about how the team of Rambabu wins the Final.