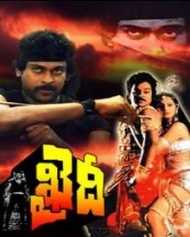 Action
Release Date : 28 Oct 1983
Cast : Chiranjeevi, Sumalatha
Director : Kodandarami Reddy
Synopsis
Khaidi is action oreinted movie in which, Suryam (chiranjeevi) works along with his widow sister in his field and studies in a college in the nearby town.
His classmate madhavi falls in love with him, but later suryam realizes that she is RaoGopalrao’s daughter who gave loan to his father and is now trying to grab his land for that.
Raogopalrao realizes about his daughter’s love for suryam and misuses his power as panchayiti president and gets suryam fixed into a police case.Suryam is arrested and brought to police station, but he bashes up the police and escapes into the forest.
Then starts a chase , that never seems to end.Injured during the police shootout, suryam reaches a doctor(sumalatha)’s place to shelter.She sees his photo in newspaper,...