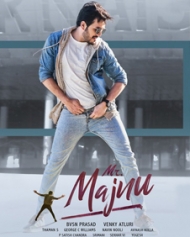 Akhil Akkineni and Nidhhi Agerwal are playing the main lead roles in this movie.

Mr Majnu revolves around the life of a carefree young Casanova who loves having a good time. Despite being a jolly fellow, he has major commitment issues and these come to the forefront when he meets his dream girl. The rest of the film deals with their love story.