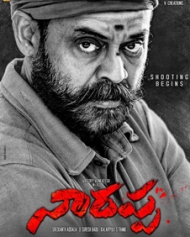 Narappa (Venkatesh) family of a remote village in Anantapur district is facing a land dispute with the  Land owner Panduswamy (Naren). As part of the fight, Munikanna, the eldest son of Narappa, is killed by the Panduswamy men. Sinnappa younger son of Narappa kills Panduswamy in revenge for the murder of his brother. The Narappa family leaves the village to save the life of their youngest son.

What is the real reason for the quarrel between the landlord and Narappa families? Narappa demonstrated patience as to why the landlord pressed the players under the lip tooth. What did Narappa do to save the life of his youngest son? Finally, the story of the movie Narappa is the answer to the question of what happened between the Panduswamy family and the Narappa family.