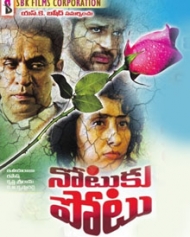 Notuku Potu is a mysterious thriller which unfolds a murder case of an high-profile women (Maya), which is played by Manisha Koirala. The rest of the plot is all about revolving around an investigation & prosecution by Arjun Sarja (Sharath Chandra), who plays a smart Police Officer in the movie.