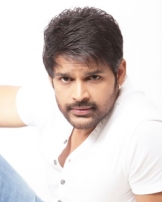 Shamshuddin Ibrahim, known professionally as Shaam, is a Tamil film actor and model. Starting his career as a professional model, he soon made his acting debut in the film Khushi (2000), appearing in a cameo role. He further on appeared in lead roles in critically and commercially successful films such as 12B, Iyarkai, Ullam Ketkumae and the Telugu film Kick.

Shaam was born on 4 April, 1978, in Madurai, Tamil Nadu, into a Tamil-speaking family. He, however, was brought up in Bangalore, where he also pursued his studies. After completing his B. Com, he pursued a career in modelling, through which he hoped to become an actor.

Shaam began his career as a model in Bangalore, modelling for various ads. Keen on pursuing an acting career, he was vainly searching for acting offers for four years. He then, following the recommendation of his model coordinator, got to meet late cinematographer Jeeva, who was planning to make his directorial debut and was looking out for a new face for the film's lead role.

Shaam was given the role and thus his acting career started as he essayed the lead role in the film 12B, starring alongside Simran and Jyothika, two of the leading actresses in the Tamil film industry during that time.

Shaam has three brothers and two sisters. He is married to a Punjabi, Kashish, who is his former college mate, with whom he has a daughter named Samaira.