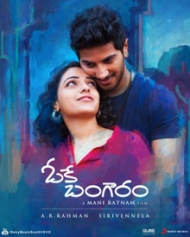 The film score and soundtrack album are composed by A. R. Rahman.

OK Bangaram is the story of a young couple in live-in relationship. Dulquer and Nithya are two highly ambitious individuals who want to settle abroad. They meet and like each other instantly. Without promising each other commitment, they decide to live together.

Eventually, the couple fall in love and the time comes when they have to take a crucial decision. Will they decide to marry or separate?