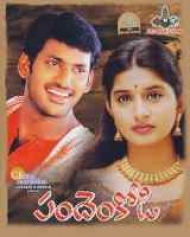 Action Drama
Release Date : 19 May 2006
Cast : Vishal Krishna, Meera Jasmine
Director : N. Linguswamy
Synopsis
Pandem Kodi is a dubbed version of tamil super hit movie Sandakozhi and it is an action oriented movie in which, Balu (Vishal Krishna) an engineering student who on a visit to his friend’s town and also falls in love with his friend’s sister Hema (Meera Jasmine).


Kasi(Lal), who is an local don of the area unfortunately Balu crosses his path on a chance instance makes Kasi to injure and a hurt Kasi decides to take his revenge on Balu. Kasi starts troubling Karthik’s family.

Besides, he also comes to know about Balu’s family. Balu is the son of Rajkiran, the head man of another village near Pulivendula, Kasi attempts a showdown with Rajkiran but finds little success. Rest of the story is about how Balu put an end to Kasi.