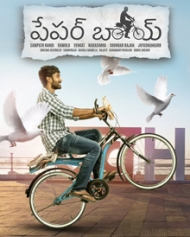 Santosh Shoban, Riya Suman and Tanya Hope are playing the main lead roles in this movie.

As the title suggests, the protagonist Ravi (Santhosh Shobhan) is a paper boy, who falls in love with a rich girl, Dharani (Riya Suman). There is not much of a variety in the making or execution of the storyline, as the movie runs on a typical rich girl-poor guy love story with a clash of ego between them and uniting back amidst opposition from family and a bundle of sentimental scenes.

Why does the difference creep up and how would they unite eventually, form the rest of the plot.