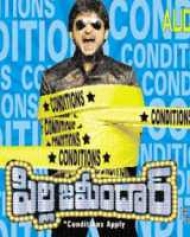 'Pilla Zamindaar' story is as old as films. Rich zamindar Nagineedu's son marries a girl against his wishes. As a result, he is deprived of the property. However Nagineedu realizes his mistake after his son and daughter-in-law are killed in an accident.

He does not want his grandson too to go in his son's way.So, Nagineedu frames a will, which specifically mentions that Nani will inherit the property only after he fulfills certain conditions.