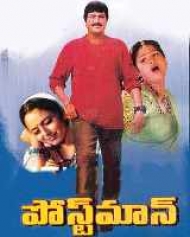 Family
Release Date : 13 Jan 2000
Cast : Mohan Babu, Soundarya
Director : Muppalaneni Siva
Synopsis
Postman is a family based movie in which, Vishnu (Mohan Babu) is a postman in Hyderabad. He is the caring guy around and everybody loves him, naturally. He has a maternal uncle called Ramkoti (Kota), who occupied Vishnu's ancestral house after the death of Vishnu's parents.

Vishnu Stays in a pathetic structure that is built on the top of Ramakoti's house. Ramakoti has a beautiful daughter called Sirisha (Raasi). Sirisha adulates Vishnu and wants in marry him.

Whenever Sirisha expresses her wish to marry him, Vishnu gives an elusive reply that he has a dream girl and he will marry her. One fine morning Vishnu brings a beautiful girl to his house. She is Archana (Soundarya). He introduces Archana to everybody and reveals that she is his fiancee.
Cast
Crew
Muppalaneni Siva
Director
Mohan Babu
Producer
Vandemataram Srinivas
Music Director
Suddala Ashok Teja
Lyricst
News
User Review
WRITE YOUR REVIEW
Post Man Comments
In Theaters Now
Upcoming Movies
Telugu Movies Box Office Collection Updates