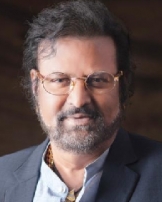 Mohan Babu born as Manchu Bhaktavatsalam Naidu, is known for his variety as an actor, producer, politician and educationist from Andhra Pradesh, India. He was conferred with the prestigious National honor Padma Shri for his yeoman services to the field of Art in 2007, by His Excellency the then President of India.

Moreover, he had been elected as a Deputy into the International Parliament for Safety and Peace, an intergovernmental organization based in Italy. He is popularly called Dialogue King, Collection King and Nataprapoorna. He is one of the living legends of South Indian Film Industry.

Mohan Babu is the eldest son of a pious retired school headmaster Manchu Narayanaswamy Naidu and Lakshmamma. He was born on March 19th at Modhugulapalem village, near the banks of river Swarnamukhi, and sandwiched between two famous pilgrim centers Tirupati (abode of Lord Venkateshwara) and Srikalahasti (abode of Lord Vayulingeswara) in Chittoor district of Andhra Pradesh.

He has three younger brothers – Ranganath Chowdary, Ramachandra Chowdary and Krishna – and a sister Vijaya. He had his schooling at Yerpedu village and Tirupati. He took his degree in Physical Education in Chennai (Erstwhile Madras).

Mohan Babu is a fine actor with his unique dialogue delivery. He has acted in more than 510 films which include 216 films as a main lead. Be it any character, he has and is still known to dominate other actors on screen. His straight-forwardness is known all over India.

His film “Pedharaayudu” is one of the several films that has come to stay as an evergreen hit that made an indelible impression on the minds of the people. His two sons Vishnu Manchu and Manoj Manchu are leading film heroes. Daughter Lakshmi Manchu is a producer and plays a prominent role in their home banner Lakshmi Prasanna Pictures.