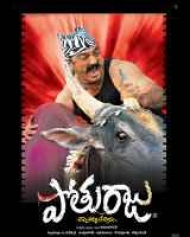 Action
Release Date : 17 Sep 2004
Cast : Kamal Haasan, Abhirami
Director : Kamal Haasan
Synopsis
Pothuraju is a Dubbed version of Tamil movie Virumandi and is an Action based movie. In which, Pothuraju (Kamal Hassan) is an irresponsible villager and a brave warrior. He has a big bank balance and the most fertile farming land in his village. He has no problems in life. Kodanda Reddy (Pasupathi) and Nagama Naidu (Napoleon) are landlords in that village who eye the fertile land of Pothuraju. One day, a murder attempt is made on Pothuraju and Kodanda Reddy's niece Adi Lakshmi (Abhirami) rescues him. He instantly falls in love with her. But something terrible happens later and Pothuraju is framed in a murder case. From here the movie steps into a realm that is totally new with two narrations, by Kodanda Reddy and Pothuraju, of the same events that took place.