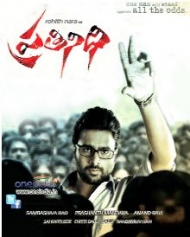 Srinu (Nara Rohith) is a young guy, who is fed up of the corrupt political system. He sets on a mission to end it. With the help of Sreekar (Sree Vishnu), who is the son of a minister (Giribabu), he successfully kidnaps the Chief Minister (Kota Srinivasarao).

When the entire country is shocked, the police system gets into action. In a bid to get the CM released, Commissioner (Posani Krishna Murali) manages to talk to Srinu, who reveals a list of strange demands in turn....