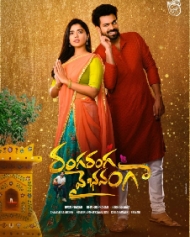 Ranga Ranga Vaibhavanga is a romantic entertainer movie directed by Gireeshaaya. The movie casts Vaisshnav Tej and Ketika Sharma in the lead roles. The music was composed by Devi Sri Prasad while the cinematography was done by Shamdat Sainudeen. The film is produced by BVSN Prasad under Sri Venkateshwara Cine Chitra banner.
Story
Rishi (Vaishnav Tej) and Radha (Ketika Sharma) are family friends. In childhood, they have a small fight over egos. So both of them stay together and remain distant in terms of a relationship. Rishi's father (Naresh) and Radha's father (Prabhu) have an unbreakable friendship between their families. Radha's elder brother Arjun (Naveen Chandra) studied at IIT and tries to excel in politics. While two families are in a mutual relationship in this circumstance due to a marriage issue, two families have to be separated.
Why did Rishi and Radha have quarrels in their childhood? What problems arose due to the quarrel between Rishi and Radha? what kind of difficulties were faced by Rishi and Radha in trying to unite the families separated due to marriage? What position has Naveen reached politically? Finally, the story of the movie Ranga Ranga Vaibhavanga is the answer to the question of how Rishi and Radha united their families together.
Release Date
Ranga Ranga Vaibhavanga movie was released in theaters on September 2, 2022.